A walk to remember: Teen’s 100K trek for JDRF inspires a community

As the sun gave way to night and the clear skies yielded to rain, Ruby Pilatzke paused for a moment to do what she does best — she crunched the numbers.

Her goal was to walk 100 kilometers (62.1 miles) to celebrate the 100-year anniversary of the discovery of insulin and to raise money for JDRF — and she was going to do it in 24 hours. Halfway through her ambitious trek between two cities just outside Ottawa, Canada, in the middle of the night, the rain started.

She evaluated her distance traveled, the wear on her shoes (growing wetter with each step), and then she checked her blood sugar. She was still in range.

Despite the fatigue, the blisters, and the rain, all the numbers checked out. She would push forward.

Even though she didn’t know it at the time, hundreds of people were waiting to cheer her on for the final leg of her walk. And when all of the numbers were added up, she would raise nearly $30,000 for JDRF.

“My whole life is an equation,” said Ruby, half joking, half flustered. “All I ever do is think about numbers. I guess if that’s the one good thing about my diabetes is that it’s made me good at math. I’m a numbers nerd.”

Ruby is in her first year at Nipissing University in North Bay, Ontario. She’s studying to become a — wait for it — high school math teacher.

Ruby was diagnosed with type 1 diabetes when she was 9. Her symptoms were initially interpreted as the flu, but they persisted. She wasn’t eating, she was wetting the bed three times a night, and she’d lost so much weight that extended family members didn’t recognize her.

Her mother, Julie, is a nurse, and she remembers taking young Ruby to the emergency room where they used a fingerstick to test her glucose level.

“The nurse in triage poked her finger and without yet knowing the result, our eyes connected, and I just knew,” Julie recalled. “In that moment, I knew what diabetes was. We learned about it in nursing school, or so I thought. In hindsight though I truly had no idea the complexities of type 1 diabetes.

“It was like, ‘OK, she has diabetes.’ But I was not prepared in my mind for what that really meant.”

What it means is that type 1 diabetes is an equation that doesn’t always add up, even when the numbers seemingly make sense.

“I think there’s a simplicity and a complexity to numbers,” Ruby said. “I guess because all I’ve been doing is numbers since I was 9, it would make sense for me to love math.”

Ruby’s journey began on Aug. 6 and would take her from Arnprior to Petawawa over a 24-hour stretch. With the exception of a few brief, scheduled stops every 10K to change shoes, ice her feet, and test her blood sugar, Ruby’s plan was to power through without interruption.

Admittedly, she wasn’t fully aware of what she’d gotten herself into. She’d done JDRF walks in the past — a 5K here, a 10K there. To prep for her century challenge, she did a 25K trial walk.

“It's a good thing she practiced because I'm not sure she really thought about what walking would entail," said Julie, with a motherly eye-roll. “She wasn't great about hydrating. I think she learned a lot from that practice walk that she was able to apply to the real thing.”

Julie and Ruby’s "Nana" would follow along in a car with resources, emergency treatments, and extra shoes.

“That first hour, I remember it being really hot,” Ruby recalled. “My legs were fine, but I was dripping with sweat. I got through the first 5K and my spirits were pretty high.”

How about the 23rd hour?

Everything ached. My feet were killing me. I was in so much pain. My emotions were through the roof. I was crying at everything. Someone would wave at me and I’d be overwhelmed and start crying.

The tears didn’t just stop with Ruby. People she'd never met saw her story on local news and showed up on the route to support her. Her little brother walked most of the distance by her side. Family friends joined her throughout the 24-hour trek. Even her boss and former math teacher came out to walk a stretch.

And naturally, her mother was also swept up in the emotion of the accomplishment.

“I don’t think she realized how strong she was and what it would mean to not only her, but the people in our community,” said Julie, her voice starting to crack. “So many people embraced her and what she was doing. Diabetes can be so isolating. I hope she saw how much she is loved.” 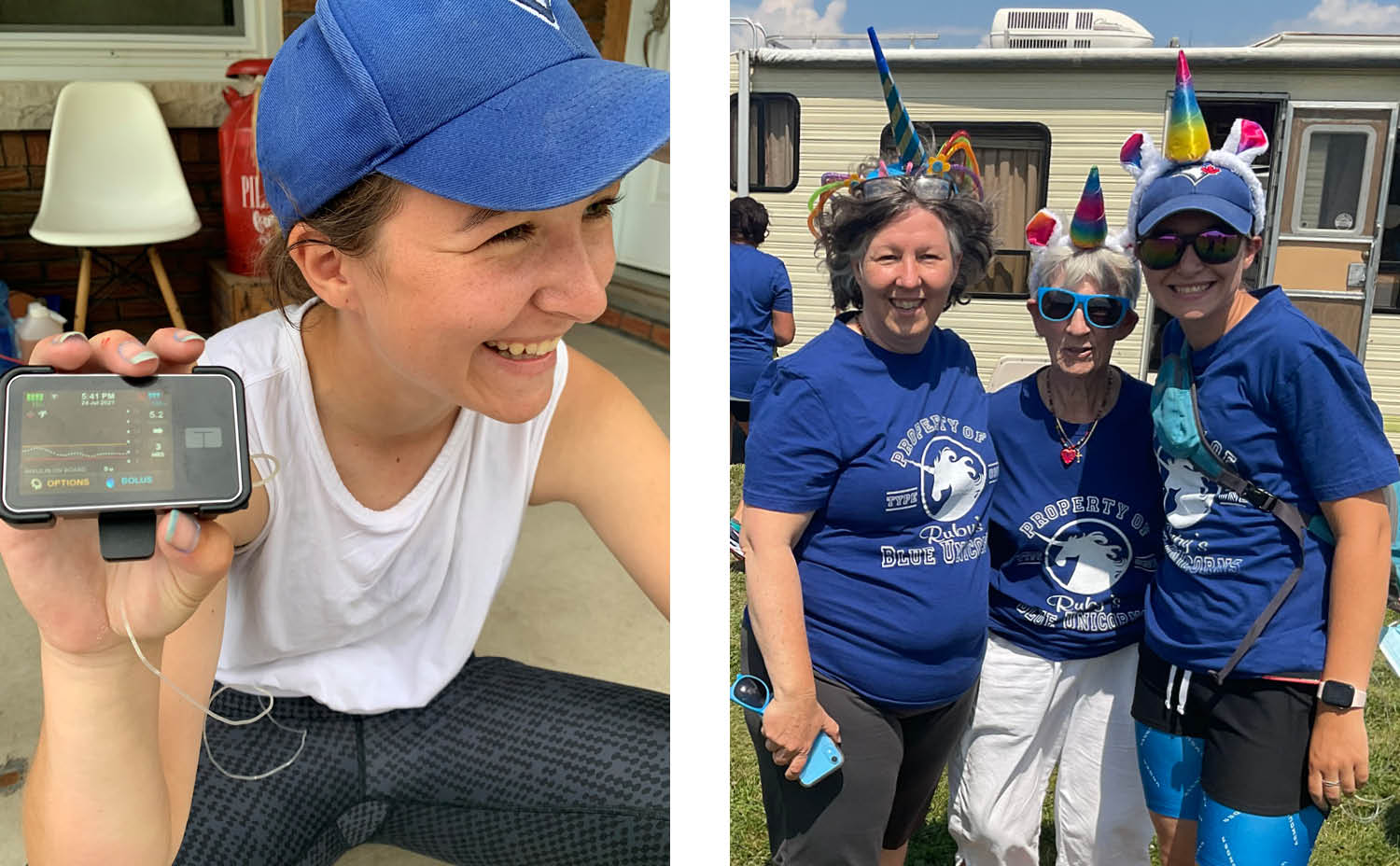 Ruby was able to get through her 100K journey with the help of her mom, her Nana, and her t:slim X2 insulin pump.

Ruby uses the t:slim X2™ insulin pump with Control-IQ® technology. And even though she’s been living with type 1 for eight years, and her mother is a nurse, she still came prepared for whatever her T1D was going to throw at her during her walk.

Fortunately, it was never an issue. She used the Exercise Activity feature within Control-IQ technology. And while fatigue and blisters were obstacles, her T1D wasn’t.

“Control-IQ technology helped so much,” Ruby said. “I didn’t even have to worry about my numbers. I’ve probably never had such perfect blood sugar in my life. Thank God it was on the day when I was walking 100K. If those had been off, the whole day could have gone wonky.”

Added Julie: “Tandem has exponentially changed our lives. Ruby has more consistent management and the lows have been drastically reduced and less severe.”

Two weeks after completing her trek, Ruby posted on social media that she still hadn’t come to terms with the weight of her accomplishment. When she talked with us two months after that, she still couldn’t completely grasp what she’d done.

She remembers approaching the finish line and hearing a chorus of fire truck sirens. Children with type 1 held up signs of encouragement. Even the mayor had to fight through local media just to offer a word of congratulations.

“I definitely wanted to inspire my community, but I don’t think I knew how much I’d inspire them,” she said. “I’ve always been the go-to kid with diabetes in our community and younger children would look to me for advice. To see some of them holding up signs and crying when I walked by, I kind of lost it.

“It was an experience I’m never going to forget.”

Congratulations on your amazing accomplishment, Ruby. Thank you for letting us tell your inspirational story for National Diabetes Awareness month.

Even with advanced systems such as the t:slim X2 insulin pump with Control-IQ technology, users are still responsible for actively managing their diabetes. Control-IQ technology does not prevent all high and low blood glucose events. The system is designed to help reduce glucose variability, but it requires that users accurately input information, such as meals and periods of sleep or exercise. Control-IQ technology will not function as intended unless all system components, including CGM, infusion sets and pump cartridges, are used as instructed. Importantly, the system cannot adjust insulin dosing if the pump is not receiving CGM readings. Since there are situations and emergencies that the system may not be capable of identifying or addressing, users should always pay attention to their symptoms and treat accordingly.