Two Moms, Twin Boys, and a Pair of T1D Diagnoses

After almost six years of struggling with infertility, Brenda Moosa and her wife, Mahnaz, decided to look into adoption as a route to parenthood. They were surprised when, within days of submitting their adoption paperwork, they were matched with a woman who was pregnant with twins.

Brenda laughs as she recalls the birth mother asking how they'd like more testosterone in the home. "Well, we don’t need any more estrogen!" Brenda told her. "In the middle of our conversation, the birth mother said she didn't need to talk to anyone else and said, 'These are the boys’ moms.'"

Brenda and Mahnaz received a call in November 2013 that the babies were coming two months ahead of what the doctors had predicted. They drove so quickly to the hospital that they even got a speeding ticket.

“I got in the car with Mahnaz and a foreign exchange student we had living with us at the time and looked at them and said, ‘I'm gonna speed,’ and they said, ‘Okay!’” Brenda remembered. “We make it halfway to Maryland and we're stopped by a cop. I tell him, ‘We're having a baby!’ and I'm sure he was like, ‘These people are nuts.’”

They made it to the hospital 30 minutes after Dawson and Carter were born. Thanks to an open adoption, Dawson and Carter see their birth relatives twice a year. The "two's" kept coming —including dual type 1 diabetes diagnoses for the boys before the age of four.

The Journey to T1D Diagnoses for Twins

“Dawson is who we call, Mr. Personality. He doesn’t meet a stranger. We call him our ‘sun,’” Brenda shared.

When Dawson was three, he started exhibiting mood swings and an insatiable thirst. Brenda and Mahnaz made an appointment with a doctor, who encouraged them to take Dawson to the emergency room, where they quickly confirmed he had type 1 diabetes.

“It was a complete shock when Dawson was first diagnosed with T1D and it changed our lives," Mahnaz said. "It was so overwhelming. How to count carbs. How to administer insulin. We would stay up all night watching him sleep to ensure nothing would happen overnight.” 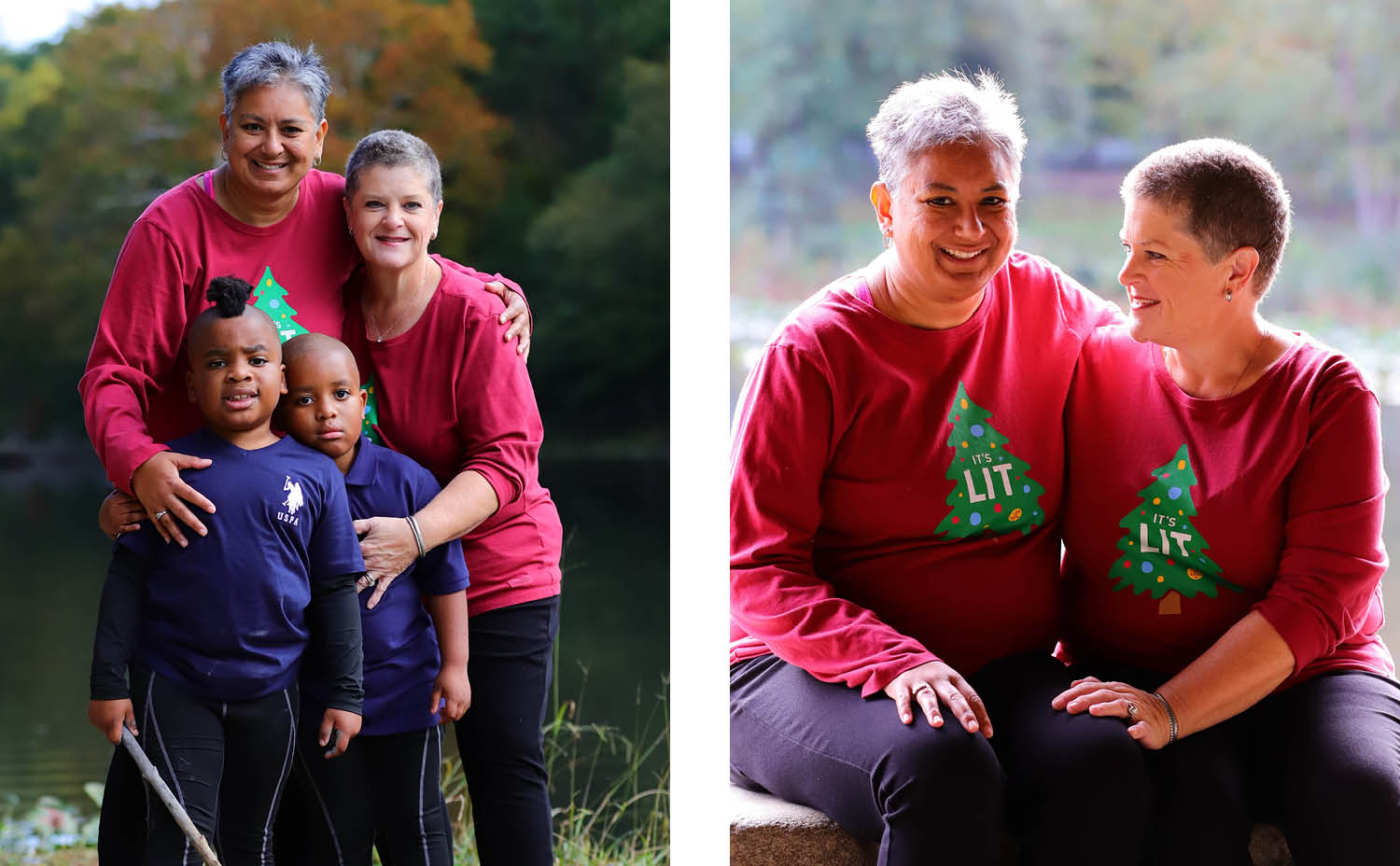 Brenda, Mahnaz, Carter, and Dawson during a holiday photoshoot.

“Carter is our steady-as-you-go son," Brenda said. "He likes his routine. We call him our ‘moon.’ We started educating ourselves and going to diabetes conferences. At one of them, someone asked if we had gotten Carter checked for T1D markers. We hadn't, because we were told the odds of both of them having T1D was (a very low percentage) given they're fraternal twins. A year later, Carter began displaying similar symptoms."

Carter started wetting the bed at night, which was uncharacteristic of him. During one of these incidents, Brenda decided to check his blood sugar, and it was 500 mg/dL.

“We just dropped our heads," Brenda recalled. “I said, ‘Okay, I’ll get dressed.’ We take Carter to the ER and I say, ‘We think he has type 1 diabetes.’ They asked how we knew and I explained his twin has type 1. Sure enough, he was diagnosed.”

When the couple sat the boys down to tell them Carter’s diagnosis, Dawson’s reaction was, “Oh, no.” But Carter had the opposite reaction, which surprised his parents. When they asked why he was happy about it, the mothers realized that Carter had been feeling left out since Dawson’s original diagnosis because they had been devoting so much attention to what Dawson needed. Carter had been helping them with things like cleaning Dawson’s finger with alcohol for the fingerstick, but they had no idea he felt like he had been missing out.

“The good news is that Dawson was diagnosed first, so Carter saw the routine,” Brenda reflected. “He was more comfortable with it all. We immediately connected the continuous glucose monitoring (CGM) sensor as soon as we got home because we had extra equipment.”

A Steep Learning Curve at Home and at School

At the beginning, there was so much to learn. The couple started with a different insulin pump, but realized between ages 4-7, the boys weren’t actually telling their mothers what they were and weren’t eating — the boys were missing necessary boluses and their blood sugar numbers were all over the place.

Brenda and Mahnaz switched their boys to the t:slim X2 insulin pump with Control-IQ technology in September 2020 and feel they have a much more proactive, rather than reactive, approach to managing their blood sugar.

During the transition to an insulin pump, Mahnaz remembers that she was initially hesitant because of the infusion set and how active the boys are.

“I was fearful they would keep pulling it out,” Mahnaz said. “After the first day, I realized the tube was long enough and the location of the site was perfect for the boys to have the freedom to be boys.”

What sealed the deal was the first endocrinologist appointment after starting with Tandem. Dawson’s A1c dropped from 11.5 down to 8.5 and Carter’s went from 9.5 to 8.3. And, Brenda and Mahnaz didn’t have to act as their pancreases 24/7. Tandem was there to help.

The couple has learned a lot about the dos and don’ts of managing T1D using a pump, including what different alarms mean. What’s more, balancing out the twins' levels has also had a positive emotional impact. The better the boys feel physically, the more balanced their behaviors have also become.

Brenda and Mahnaz did their best to educate the boys' teachers and, as a result, Brenda noted that the support from the school-care team has been outstanding.

“The early stages of that journey were challenging, but we’re so thankful for amazing teachers who have invested time and energy into learning how to keep the boys safe while they’re at school. The nurses love the pump and the fact that they’re able to control their blood sugar levels better.”

Advice for Fellow Parents of Children Living with T1D

Brenda and Mahnaz understand the vast amount of information parents of newly diagnosed T1D children need to learn in a short amount of time. They suggest working with diabetes educators who can help with different phases of the education process. This can help parents understand the impact of individual foods and how everything else plays into managing T1D, such as stress, emotions, and activities.

While it can be exhausting, requiring a hypervigilance they don’t wish upon anyone, Brenda and Mahnaz appreciate that the t:slim X2 insulin pumps help their twins stay in range for longer periods of time, which has enabled the entire family to sleep better at night. And, when it comes to twins with T1D, getting essential rest is a big deal!

What the Twins Think

This year, right after school started, Dawson's teacher was asking the kids if they had questions. Dawson raised his hand, stood up, and said, “I just want everybody to know you're gonna hear alarms going off.” He wanted to address the elephant in the room.

“I wear a pump, it's in this pouch, and I have this device on my arm,” he continued. “It's going to have alarms go off. Just know that it's normal for me. You don't need to be concerned. I've got it under control. I have type 1 diabetes and I don't want you to be worried, everything's handled.”

The teacher was taken aback by his maturity.

Brenda jokes that Carter is a ladies’ man, and subsequently has a group of girls who ask the teacher if they can see the Dexcom app on his phone to see his blood sugar level. Carter then explains what the arrows mean. Everyone has been impressed by the level of empathy from their classmates.

“As a family, we love new experiences,” Mahnaz says. “In 2022, we look forward to Dawson playing basketball and participating in Boy Scouts as Carter starts Ninja Gymnastics. We have family trips planned, too. Diabetes does not define who the boys are and with the t:slim X2 pump, the boys can be boys where they're not restricted in their activities. Our love for travel and new experiences can continue on.”

Even with advanced systems such as the t:slim X2 insulin pump with Control-IQ technology, users are still responsible for actively managing their diabetes. Control-IQ technology does not prevent all high and low blood glucose events. The system is designed to help reduce glucose variability, but it requires that users accurately input information, such as meals and periods of sleep or exercise. Control-IQ technology will not function as intended unless all system components, including CGM, infusion sets and pump cartridges, are used as instructed. Importantly, the system cannot adjust insulin dosing if the pump is not receiving CGM readings. Becausee there are situations and emergencies that the system may not be capable of identifying or addressing, users should always pay attention to their symptoms and treat accordingly.