How the Wrong Diagnosis Led to a New Purpose

In February 2011, Dr. Phyllisa Deroze found herself in the emergency room with a blood sugar level of over 500 milligrams per deciliter. She had many of the classic symptoms of type 1 diabetes, which ranged from frequent urination and vision problems to unexplained weight loss and tingling in her extremities. She even experienced cognitive issues.

"That was my first year in my dream job of being an English Literature professor and I wasn't able to give lectures in my class because of the serious cognitive challenges," she said. "I felt like something was killing me — I just didn't know what it was."

The first diagnosis Dr. Deroze received was that her electrolytes were off, while the second diagnosis was that she had type 2 diabetes — neither were right. It would take eight years of Dr. Deroze advocating for herself to discover that she had Latent Autoimmune Diabetes in Adults (LADA) and finally receive the correct type 1 diabetes diagnosis.

Sometimes, LADA is called "type 1.5 diabetes," because it is a subtype of type 1 diabetes. While some researchers do not see LADA as a distinct condition, others believe diabetes occurs on a continuum, where LADA falls between type 1 and type 2 diabetes.

"Part of my advocacy work stems from making people aware of the signs," Dr. Deroze said. "Because I probably would've gone to the doctor sooner had I known what hyperglycemia was."

Dr. Deroze started her first blog, "Diagnosed Not Defeated," from her hospital bed in 2011. It was the mantra she needed, especially during the initial dark days of thinking about living with any type of diabetes for the rest of her life.

Advocating for Her Own Health

Dr. Deroze's journey of misdiagnoses culminated in 2019 when she began to feel increasingly sick and wanted to know why she was getting worse rather than better.

A year earlier, she had shared her diabetes story with a room full of physicians from the Middle East North Africa (MENA) region of the world who raised the question of whether she might have LADA.

"During the lunch, one of the physicians came up to me and said, 'You really have to find out if you have LADA — don't stop until you have the answer,'" Dr. Deroze said. "That statement haunted me. In hindsight, she must've known that I would have a really hard time getting the correct diagnosis."

"By now I had a continuous glucose monitor, so I could see where my blood sugar was," Dr. Deroze said. "I ended up going to my gynecologist to ask if she would give me type 1 antibody testing and she did. She returned those results to my endo, because clearly, I had type 1." 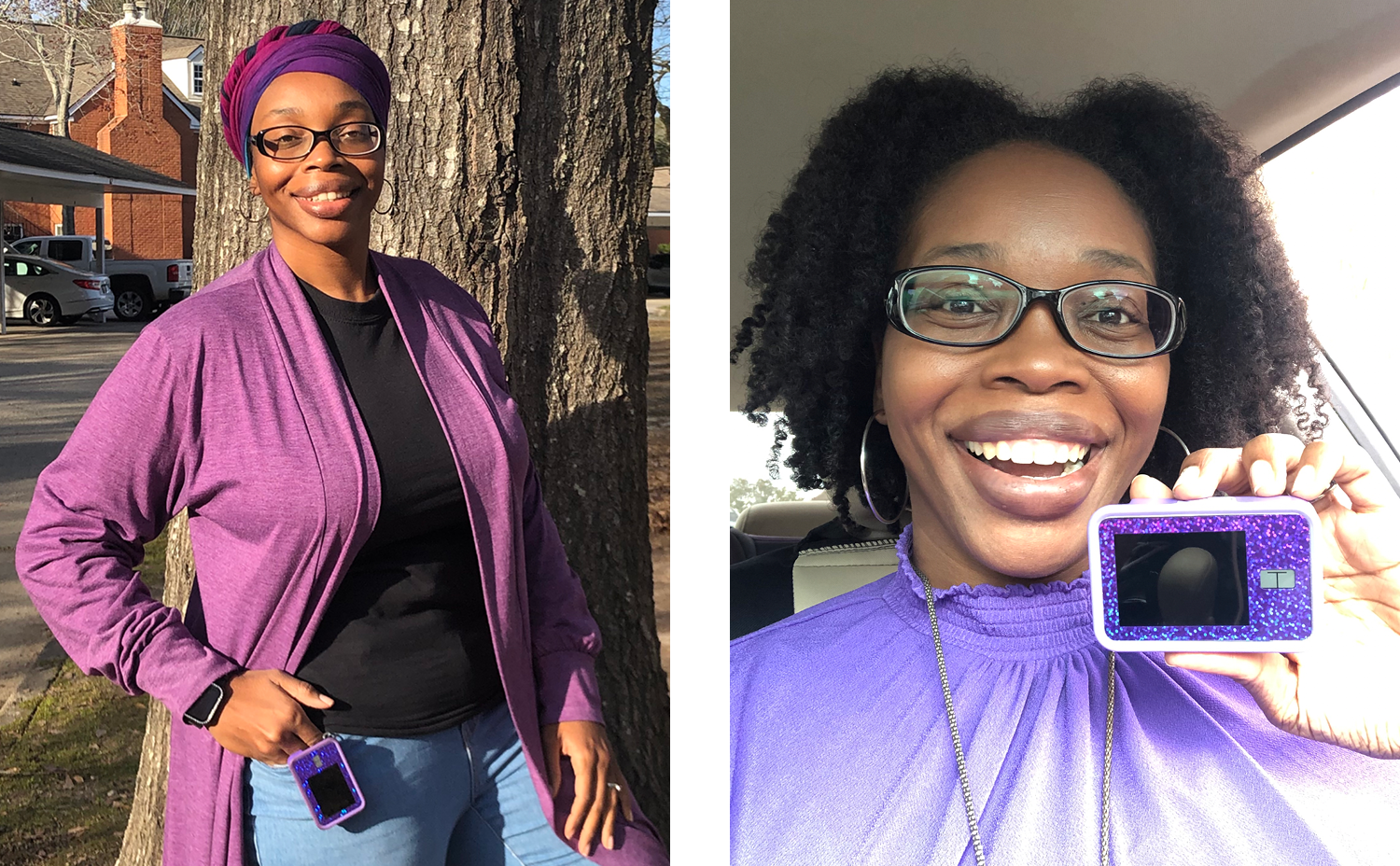 Discovering Tandem and A New Purpose

Dr. Deroze first learned about Tandem Diabetes Care and the benefits of continuous glucose monitoring (CGM) with Dexcom, by being active within the online diabetes community. When she returned to America after living abroad, she was excited to try the t:slim X2 insulin pump with Control-IQ technology.

Dr. Deroze started using a t:slim X2 pump in October 2020 and loves how it improved her sleep.

She also saw significant improvements once she started trusting the Control-IQ technology algorithm.

"I've had a 5.5 [A1c], which I hadn't had since two years after my diagnosis," she said. "I just really, really enjoy it. And, I'm excited about trying the new products coming from Tandem in the future."

Throughout her diabetes journey, Dr. Deroze has struggled to find culturally relevant information and wanted to see images of African Americans living with type 1 diabetes who were smiling and living life.

"I want to be able to eat foods that are from my culture and relevant to me," she said. "The stuff I was getting from my nutritionist and diabetes educator didn't speak to that."

That's when she decided to start her own inclusive website, blackdiabeticinfo.com, to be the resource she needed when she was first diagnosed.

From teaching how to cook diabetes-friendly culturally relevant foods, to sharing tips on how to navigate the healthcare system as a person of the BIPOC (Black, Indigenous, and People of Color) community, blackdiabeticinfo.com is an eclectic resource for Black people all over the world.

"Whether you're Caribbean, African, Black American, blackdiabeticinfo.com is pretty much the Black diabetes newsfeed," Dr. Deroze said. "I share whatever is available and relevant. It's a space where anybody can come learn about the experiences of Black people living with diabetes."

Thank you for sharing your story, Dr. Deroze, and creating positively different resources many people can learn from.

Even with advanced systems such as the t:slim X2 insulin pump with Control-IQ technology, users are still responsible for actively managing their diabetes. Control-IQ technology does not prevent all high and low blood glucose events. The system is designed to help reduce glucose variability, but it requires that users accurately input information, such as meals and periods of sleep or exercise. Control-IQ technology will not function as intended unless all system components, including CGM, infusion sets and pump cartridges, are used as instructed. Importantly, the system cannot adjust insulin dosing if the pump is not receiving CGM readings. Because there are situations and emergencies that the system may not be capable of identifying or addressing, users should always pay attention to their symptoms and treat accordingly.