Kyle Aarup is a fourth-generation off-road racer. He was diagnosed with type 1 diabetes at age six and two years later was in an accident while practicing on his home track, which fractured his C1 and C2 vertebrae and ripped all the muscles and ligaments off the base of his skull. Contrary to what his doctor told him, Kyle completely recovered after two major surgeries, and he was able to pursue his racing dream. Read more about how Kyle finished his 2016 Pro-Buggy debut season with two championships, diabetes, and all.

At 8 years old Kyle was riding his dirt bike on his family’s personal track. The last thing he remembers was following a groove worn in the dirt and coming into a banked turn.

“I woke up in my dad’s truck not remembering what had happened or how I got there,” says Kyle.

As they drove to the hospital, Kyle was in excruciating pain. “I felt like a bobblehead and wasn’t able to hold my head up.” Every time the truck hit a little bump in the road, he screamed.

Kyle’s friend had been riding behind him at the time he crashed, and said that Kyle went over the handlebars and dove head-first into the dirt.

Kyle fractured his C1 and C2 vertebrae and ripped all the muscles and ligaments off the base of his skull. He had to have surgery to reinforce his neck and spine with metal plates, and afterwards he was put in a complete head brace.

He was extremely active before the accident, yet had to be sedentary during his recovery.

“We were afraid to take him anywhere in the car, because any sudden braking or steering would set his recovery back or hurt him further,” Kyle’s mom, Shanon, remembers.

Kyle’s stress and immobility after his surgery significantly impacted his diabetes management. His insulin requirements doubled, requiring constant adjustments to his basal rates. The pain medication also messed with his insulin sensitivity.

Obviously, Kyle had to take a break from racing.

“I was in a lot of pain for the two years between the accident and my second surgery,” says Kyle. “According to the doctors, I was extremely fragile and if I took a blow to the head it would kill me. It was difficult giving up what I loved, but we made the best of it. I knew I had to manage my blood sugars and luckily I had my parents’ help.”

Like many, Kyle started out using multiple daily injections when he was diagnosed. However, he started to experience frequent low blood sugars, which made it hard for him to stay safe during his races.

“The doctors always told me I was extremely sensitive to insulin, activity, and carbohydrates,” he says. “They felt an insulin pump would be better at managing my diabetes. It was a life changer for me when I started using my first pump.” 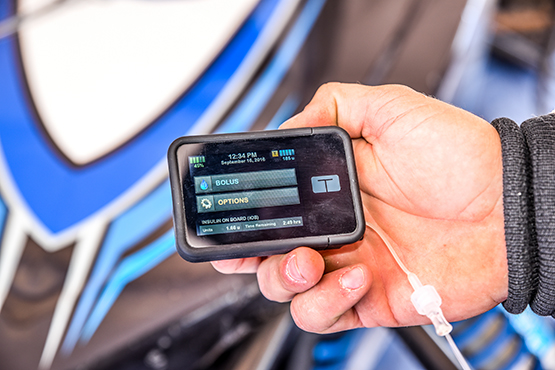 From the beginning, even before his accident, Kyle enjoyed the flexibility the pump offered him for mealtimes and snacks, not having to pull out a syringe and give himself a shot.

“I started using the pump to correct high blood sugars, and it was appealing for my parents – who still helped me a lot with my diabetes management as a kid – to have the option of setting a temporary basal rate during times of increased activity.”

After the accident, they continued to use temporary rates to keep his blood sugar down when he wasn’t able to be active.

Kyle’s neck completely recovered and was back to normal strength after two years.

He took it easy for a while and enjoyed recreational driving a Razor. But it wasn’t long before he really missed competing.

“My A1c’s were good and my dad finally convinced my mom that I was ready to get back to racing.”

He gradually got back into it. First, driving in a car with a cage which provided extra protection for the driver.

He currently races an Alumacraft Craft Pro Buggy Race Car in the Lucas Oil Off-Road series – a short course, off-road racing series in the United States that travels to Arizona, New Mexico, Utah, Missouri, Nevada and California. The track lengths are anywhere from one to 1.5 miles. There are approximately 10-15 competitors on the track at one time. 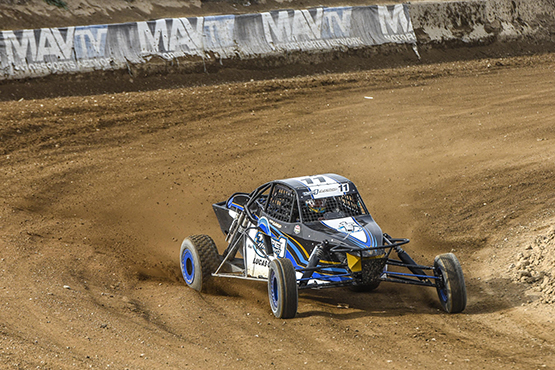 “To drive in short course racing you must be in shape and have stamina,” Kyle explains. “Your muscles get a workout as you leap over jumps and shift position 50-100 times throughout the race.”

The Aarups believe that Kyle’s accident was caused by a low blood sugar, so since then, he’s become more cautious about managing diabetes over race weekends. Fortunately, his crew is made up of mostly family members, so everyone understands the symptoms of hypo and hyperglycemia and the treatment procedure for both. In addition to the races themselves, Kyle has to pay close attention to avoid low blood sugars while preparing his car for races and overnight after an exhausting day.

Kyle says he works twice as hard to maintain himself for optimal performance on and off the race track.

“Most people have the best race car equipment to keep them on top of their racing game. I run on the best diabetes technology to stay on top of mine. Both my Tandem insulin pump and Dexcom sensor play a vital role in my performance at the track and all other areas of my life. It would be extremely challenging for me to race without them, especially since I can decrease my basal rates before I get behind the wheel to avoid unsafe low blood sugars.” 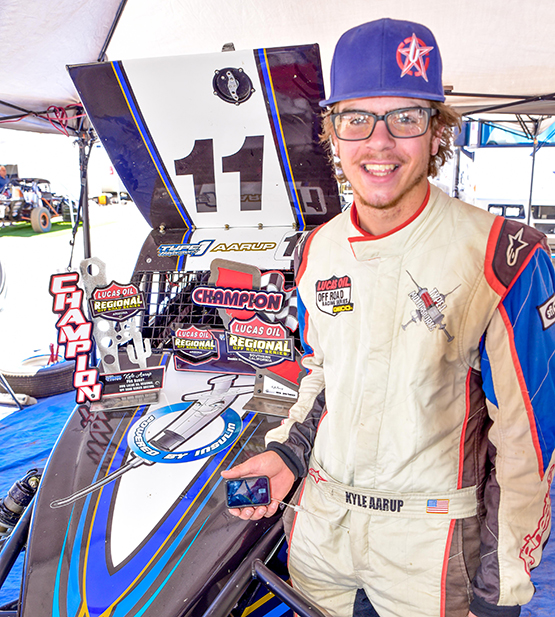 “Ten years ago I suffered an injury from which most people do not walk away. It was a miracle that I wasn’t paralyzed or dead. The neurologist said I was destined to do something great and that was the only reason I was still alive. I’d like to think that the reason is to help make a difference in the lives of people with diabetes. I would like to be able to inspire others and help them achieve their dreams, despite any obstacles on their ‘track’. ”

As Kyle reflects on the last year, he says, “2016 was a GREAT year for Type 1 Motorsports. We brought home two championships, raised awareness about type 1 diabetes and connected with several new people in the diabetes community. It was such a positive year for me as a person with diabetes.”