t:slim Pump user Dee Anne Gauthier remembers traveling by bus on Sundays from Clara Barton diabetes camp for girls to Dr. Elliott P. Joslin’s private estate in Vermont where she spent the day eating watermelon and petting his horses with other girls with diabetes.

Joslin was the first doctor in the United States to specialize in diabetes and was the founder of today’s Joslin Diabetes Center. He identified that tight glucose control leads to fewer complications and he’s known for teaching patients to care for their own diabetes, a popular concept now.

Dee Anne was one of these patients and twenty years ago she walked back through the doors of the Joslin clinic to accept her 50 year medal, recognizing individuals who have lived with insulin-dependent diabetes. 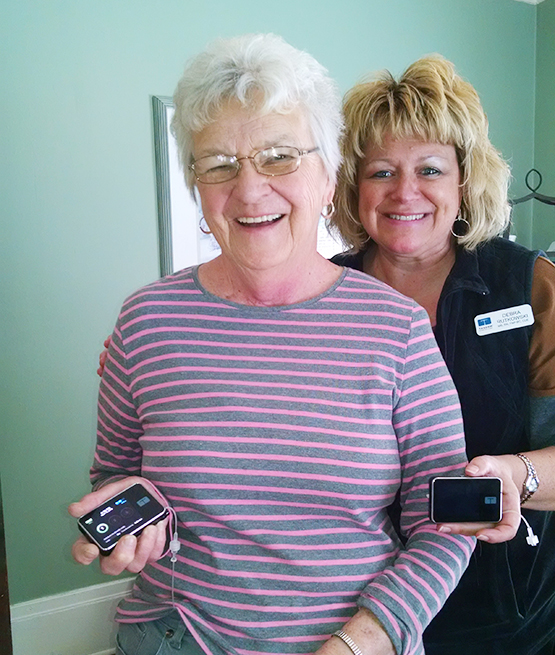 At seven years old she attended a one-room schoolhouse where the water pump was outside. The teacher noticed that she was constantly running outside get a drink. Diagnosed then in 1947 with type 1 diabetes, she was told she would live 25 years. The guidelines she was given at her diagnosis were very specific.

“A strict routine, diet, and exercise – this is what has helped me through the years,” she says. “With insulin back then, you had a schedule, and I have tried to keep that schedule my whole life.”

Dee Anne says, “I am very disciplined. I don’t know if I’m a disciplined person, or if the diabetes has made me disciplined. I stick to the rules, watch what I’m eating, count carbohydrates, and you’ve got to exercise.”

She learned this early on at Clara Barton camp. Running around petting horses after eating watermelon was a strategy for good blood sugar control.

“At camp you were educated. They tested our urine, we gave ourselves insulin, and then we exercised. Sometimes we walked, sometimes we played ball, sometimes we swam, but after meals this is what we did. It kept us steadier.”

She’s practiced this ever since.

“Through my life, we cross country skied, we hiked, and we did a lot. Now I walk a lot. During this winter it’s been harder for me to exercise, so the diabetes has been off a little bit. Once I get out there and exercise, everything is just fine.”

In addition to the education she received from Camp Clara Barton, Dee Anne's parents took her to see Dr. Joslin.

“He cared,” she remembers about what made Joslin a good doctor. “He really cared about all of us diabetic children. I remember sitting in his office in a little blue dress. ‘I want to see your urine the color of your dress’ he told me. Because blue was good. I’ll never forget that.”

On urine glucose dipsticks that test for glycosuria, the excretion of glucose in the urine, blue correlated with no spillage.

Along with Dr. Joslin, Dee Anne credits her parents for her healthy lifestyle. She remembers her parents taking her diagnosis in stride, although she’s sure it was hard on them. Her father noticed her resilience and discipline. He told her that she was the one who got diabetes because she was the one who could handle it. Dee Ann has three sisters. None of them have diabetes.

She grew up on a farm and the family ate modest meals that catered to Dee Anne’s diabetes.

“My mom fed me right” she says with tears in her eyes. “We didn’t have diet foods and the sugar-free options were terrible anyway.” They ate together and the only difference Dee Ann remembers was when they celebrated an occasion with cake her piece had different frosting.

As an adult, she just sort of supported herself. “I’ve been married 56 years and my husband has no idea if I’m in a low blood sugar,” she said. “I sort of tend to this myself.” Now, her husband has type 2 diabetes, but he doesn’t use insulin. Her wish is that he follows her example that a diet that’s good for someone with diabetes is good for everyone.

"I don't have any trouble saying no," she says about her food choices. “Now we have pumps and things which make it much better, but I watch myself." She let's herself have an ice cream treat just once a year.

Dee Anne has a nephew and niece who were diagnosed as kids. Her nephew, now a college student, was also a Joslin camper. Dee Anne has been a resource to them and her niece says Dee Anne's advice is the same as her own doctor's. To anyone newly diagnosed, Dee Anne recommends listening to doctors in order to learn about diabetes, paying attention to how foods affect your blood glucose, and exercise.

Whether she was aware of it or not, Dee Anne speaks as a true disciple of Dr. Joslin.

Dee Anne is self-disciplined about her health and happy about it. In today's world of endless options, it is nice to know that simplicity is an option, and it's one that has our pioneer sitting just a few years short of her 75-year medal.