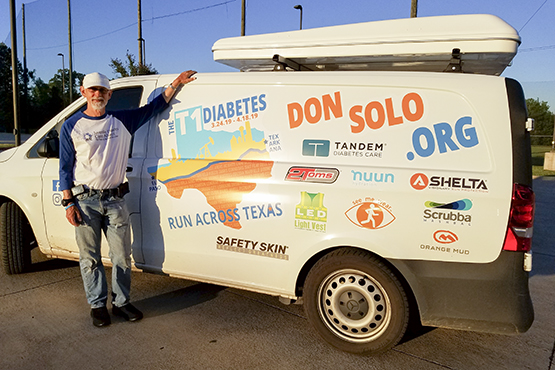 He started running in 2004 after a laser treatment for diabetes-related retinopathy.

“I promised myself if I had a do-over, I’d jump on it and never look back. Running was a cheap way to start being active.”

In March, Don ran across Texas -- 850 miles (28 counties, 108 towns) in 27 days. He accidentally set a FKT (Fastest Known Time) by 2.5 days. Before that, he did a 339-mile solo run across Iowa, giving himself just 8 days at 45 miles a day, and bad weather forced him to increase miles on some days to make up for days cut short by thunderstorms.

Don and his wife bought a small Mercedes cargo van from a bankrupt small business for their long-distance runs. They outfitted the interior with commercial “lashing rail” and mounted two 5-gallon water jugs, five jerry-cans of water, and nine duffel bags with sorted shoes, clothing, first aid, and diabetes supplies. It has a 100AHr deep cycle battery and a low wattage refrigerator, plus a micro camp-stove, emergency lighting, big netting and a sleeping mat. 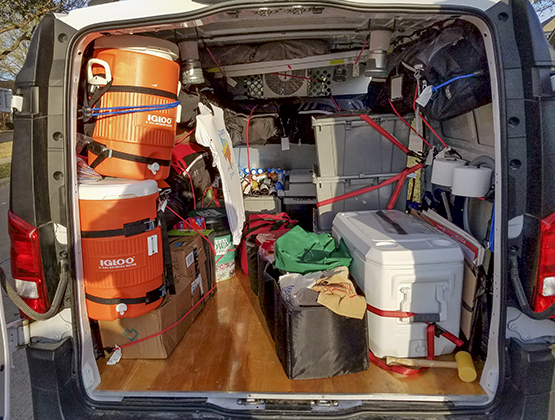 The van has a 4-cylinder turbo-charged engine that has a 16-gallon gas tank and gets 25 mpg fully loaded, so they are prepared for 400 miles of unsupported running at a time.

“My wife Leslie has been fantastic in supporting me,” Don said. “When you marry someone with type 1, you’re signing up for sleepless nights, dealing with night sweats and frightening lows, having to prep and administer glucagon with shaky, nervous hands, and you share long-term worries about health later in life.”

Once he started becoming active in 2004, Don felt he needed a community of other type 1s to learn from and exchange ideas about diabetes and exercise.

Q1: Tell us about the Diabetes & Exercise Alliance. What were your catalysts and motivations to start the organization?

A lot of us were, at the time, figuring it out all by ourselves. Even though we didn’t always have a clue, being able to meet and communicate with others like me really helped me see ideas I hadn’t been trying. Our little group of about half a dozen has since grown to about 700 members in the Dallas-Fort Worth area.

When we started the organization, we decided we’d live by four key rules: We would not accept dues, we’d rely on volunteers and not paid staff, we wouldn’t tolerate blatant selling to members, and we wouldn’t welcome members whose only goal was to complain about how it sucked to have diabetes.

We’re here to help each other, not to share the misery of living with the disease. We’ve continued to live by those rules, and they’ve served us well.

I’m proud that despite a late start on fitness (I did my first 5K at age 43), I was still able to train for and complete an Ironman. I’m also incredibly proud that the little group of fellow type 1s I helped put together back in 2005 is so large now.

We’re talking about people who not only do Ironmans, but do solo swims around Key West (12.5 miles), set records mountain biking the Pacific Coast Trail, have done 100 and 200+ mile runs, deadlift automobiles, and climb mountains. I am in awe of those people. My endocrinologist nicknamed them my “mutant band of diabetic superheroes.”

People can always get involved.

If you want to be on our mailing list, drop me an email at muchow@earthlink.net. Otherwise, search Facebook for “Diabetes and Exercise.” Our groups will come up.

So if you want to be a member, you’re a member! That’s it. We do ask, though, that members share any plans they have for a great run, ride, swim, or other workout they’d like to have company for; and we’ve learned that as long as something is going on, people will join it.

Q2: You say, “After insulin, the best treatment for Type 1 diabetes is staying active.” Can you describe how it helps?

In my experience, staying active improves insulin sensitivity. Lower doses mean fewer peaks and valleys and less of a roller-coaster ride trying to keep steady blood sugars. Also, it’s my belief that staying active helps reduce the kinds of unproductive physical and psychological stress on the body that cause elevated blood sugars. I know there are some 20-odd factors that can affect blood sugar at any time, but I think we broadly underestimate the effects that just the one factor of stress has on blood sugar control.

Q3: On these long runs, how do you fuel your body?

We are very meticulous about route planning so that while taking low-traffic back roads (including much of the little-used 100-year-old Bankhead Highway) we still hit civilization every 10-12 miles in most areas, except the Chihuahuan Desert. 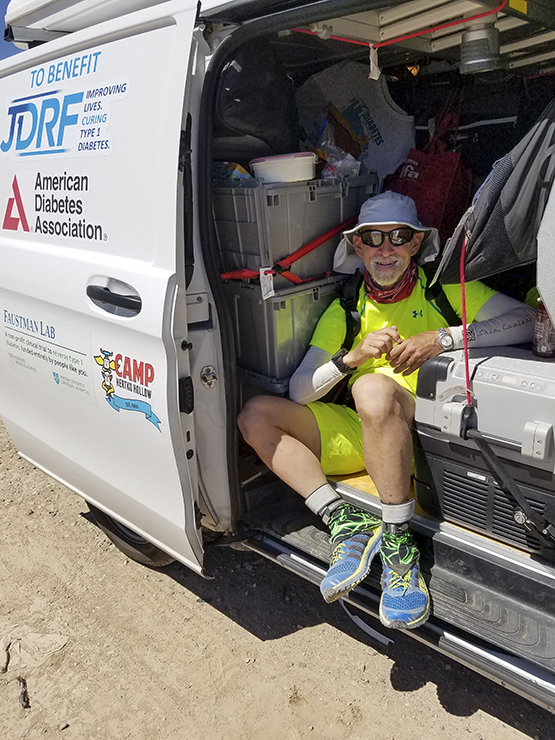 Fuel-wise, I’ve found that on super-long runs, getting enough calories and enough protein are difficult. During the Austin to Corpus run I lost 7 pounds in 3.5 days on a 4000-calorie a day diet. Running Iowa, I ate around 5500 calories a day and didn’t lose or gain any weight. For Texas, we’ll probably shoot for taking on about 5000 calories a day, mostly in the form of milk, full-fat yogurt, pudding, chicken salad, eggs, and a fair number of high-calorie, easily digestible snacks we can reliably pick up at gas stations. I know conventional wisdom says that stuff is bad for you, but you can’t knock a good source of calories when you need it.

Q4: Have you always used an insulin pump?

I started pumping about the time I started being active, in 2005 if I remember correctly. I liked the idea of micro-bolusing to adjust blood glucose levels, and the idea that the device would record insulin on board. That made it so much easier to count carbs, which I had just started doing.

Q5: How did you hear about insulin pumps by Tandem Diabetes Care?

I ran across the company a few years ago when I was searching for a waterproof replacement for my old Medtronic 530 pump, which was notoriously sensitive to humid weather. I chose the Animas Vibe back in May of 2016, in preparation for using it during my first full Ironman in Texas. I used it in conjunction with a Dexcom G4 System. It was great – until the company went out of business.

Medtronic made it easy to switch and I was attracted by the automated insulin delivery for low prevention. But the dream and the reality were far apart. I struggled with the sensor and the Auto Modes that relied on the sensor.

I knew I wanted to return to Dexcom, so I took a second look at the Tandem / Dexcom combination. During epic runs, I needed the ability to bolus a small amount manually for a meal without losing the ability to have the pump/CGM combination to help keep me out of a low. I knew I would switch to Tandem when I discovered it had an auto-suspend feature that I felt would still allow me tight control, because suspensions could be very short, had manual delivery of boluses, and it integrated with the Dexcom G6.

After seven months using the 670g, I had the opportunity to cut over to the Tandem t:slim X2 insulin pump by taking advantage of an upgrade prograde offer for $1000, since insurance wouldn’t pay for another pump for another four years. I can honestly say that it was the best $1000 I ever spent.

Since switching to Tandem, my A1C has improved by 0.8 in just the first month of use.

On day 9 of the run across Texas, after running 41 miles at my fastest pace to get past oilfield traffic going into Odessa, I had a very low blood sugar episode – the perfect storm of endurance running variables. 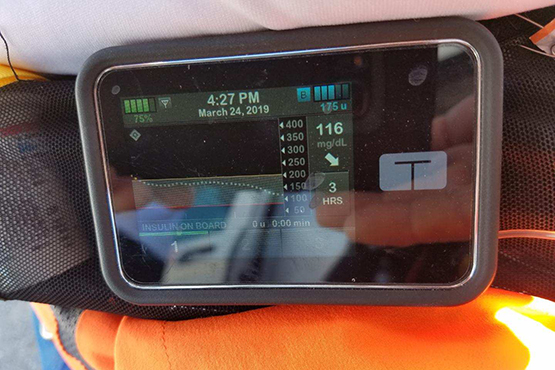 Q6: In what way does diabetes affect your daily life?

Diabetes has made me much more conscious of my role in maintaining and improving my health. Without it, I suppose I’d be just another statistic among the large number of unhealthy people in the US. I realize it’s a deadly disease and it doesn’t have a cure, but in a way, it’s made me appreciate my health even more since I’ve had to work to maintain it.

Q7: Do you have any diabetes tricks or tips you want to share with the community?

Not sure about tricks, but I will say two things. One is that over 20 factors affect blood glucose, so don’t kick yourself too much. Keep trying for good control, but remember that failure is a learning opportunity, and tomorrow is another day. Get used to seeing your BGs as data, not a pointing finger of blame. You’ll thank yourself for that. 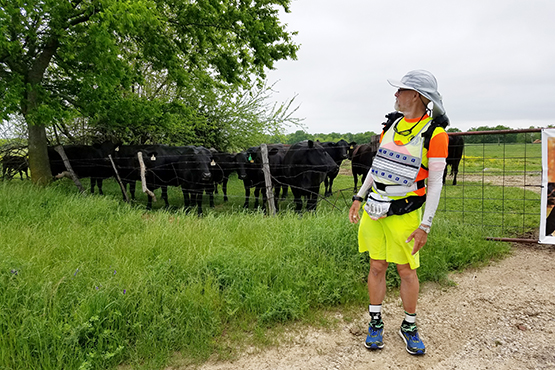 Q8: Do you have any diabetes gear you’d like to recommend?

Unfortunately, we T1Ds are not able to just walk out the door with a couple of gels and a $20 bill and wing it. I have found that the Naked Running waistband does a great job of holding my test strips, lancing device, glucose meter, cellphone, wallet / medical ID, pump, and running gels without inverting itself due to the weight of the contents. So that’s been a great thing to have. I’ve also found that the Dexcom Clarity and Follow apps really help put my wife’s mind at ease when I’m out on a 40-mile training run.

I’m considering a relay swim around Key West and planning for a 2020 run across the continental US. Still deciding whether to do San Diego (Dexcom and Tandem HQ) to Washington DC, or possibly attempting to become the first person to run from Disneyland to Disneyworld. 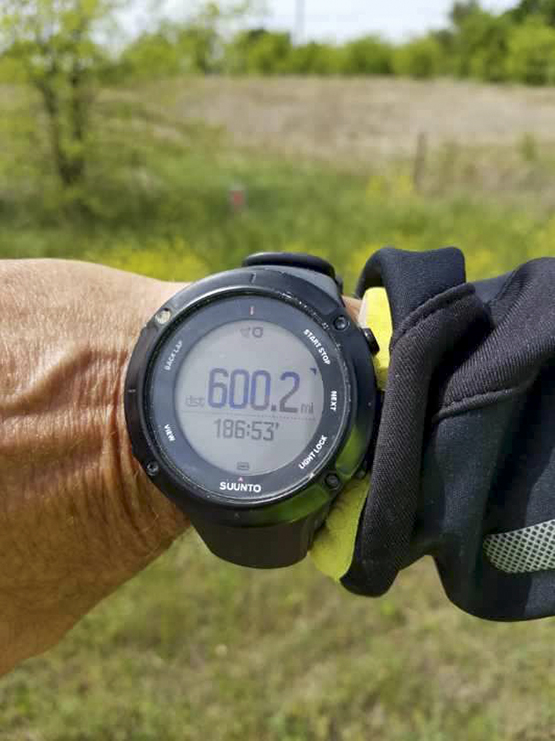 We have to make ourselves and our stories about living active / productive lives, despite the disease, more visible and use that moment in the spotlight to underscore the kind of help we do and do not need from non-diabetics.