As he peered over the crest of Florida’s Melbourne Causeway, Don Muchow could see U.S. Route 192 dissolving into a quaint village street. Then a few blocks farther, the Atlantic Ocean.

Don had started his journey in Southern California more than 14 months earlier. Now, after 2,845 miles, he was on the verge of joining a select group of people living with type 1 diabetes to make a transcontinental run.

The sound of honking horns snapped him back into focus.

“I never really knew if honks meant, ‘You idiot!’ or ‘Way to go!’” he recalled. “But as it became more frequent, I realized they were cheering me on to the finish line.”

A small crowd of local runners had appeared to welcome Don into Indialantic, Fla., where traffic had been halted by the local police. Hand-drawn posters lined the streets as family members and strangers greeted him with cheers and high fives. Within a few minutes, Don was taking his final steps onto a boardwalk ramp — and finally, into the white sand. 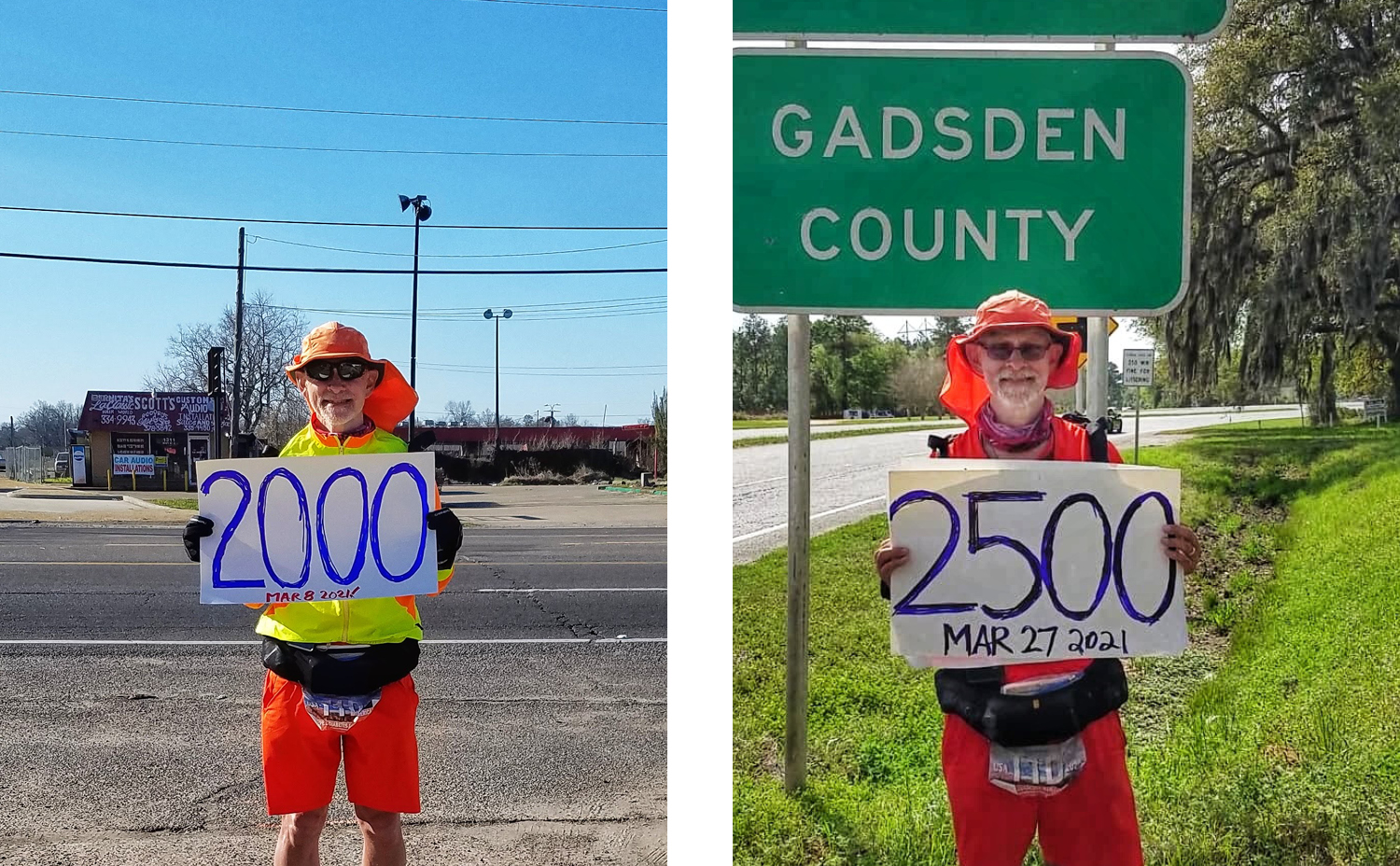 After placing a nautical token in the ocean to honor his late father, Don finally had a moment to rest.

“The feelings I had were overwhelmed, grateful, exhausted, buzzed, exhilarated, and suddenly very tired,” he said.

The idea for Don’s project can be traced back to 2004 when he started running at the age of 43. It had been his response to early diabetes-related vision complications.

In the years that followed, he began to stack his mileage along with his network of peers. By 2019, he had run across Texas (850 miles) in record time with assistance from the Diabetes & Exercise Alliance — an organization he founded to connect type 1 athletes seeking support.

Every big run I’ve done has had two goals. First, to connect more folks with type 1 and help them develop their own strategy to exercise safely. Second, to show kids and adults with type 1 that they can still dream big.

Don knew he would be tested during the coast-to-coast journey, but he could never have imagined what lay ahead when he left Newport Beach, Calif., in February 2020. His wife, Leslie, who crewed the van and served as the project’s operations manager, originally estimated it would take fewer than 90 days for them to cross the eight states in their path.

But within weeks of their start, Don and Leslie faced the first of many challenges. Don’s father had already been diagnosed with advanced lung disease. Then the World Health Organization was preparing to declare COVID-19 a global pandemic. On March 22, 2020, Don and Leslie were forced with the difficult decision to temporarily suspend their run in Tarzan, Texas. 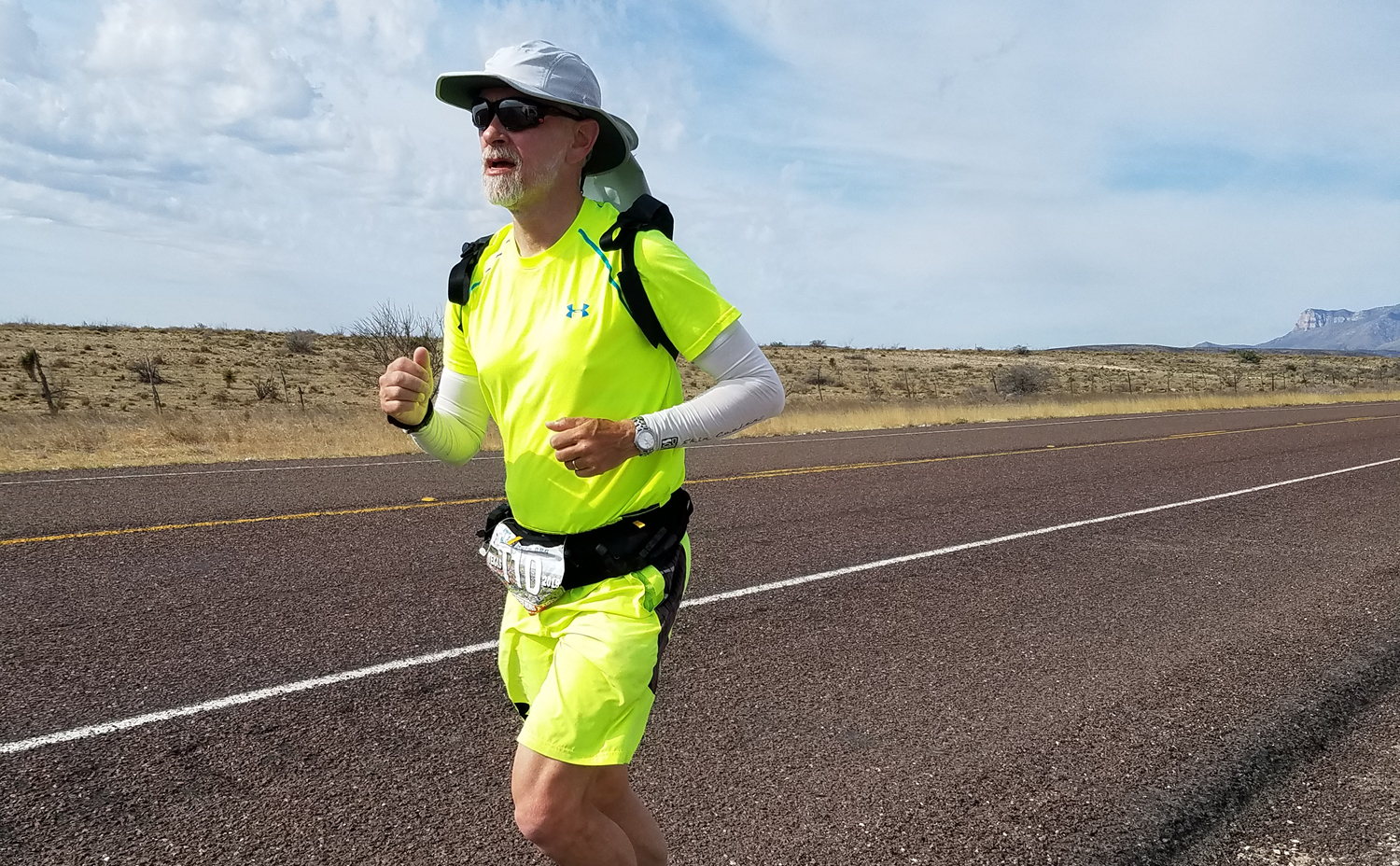 “Seeing the headlines and lines at Costco made us think hard about the wisdom of being out there,” recalled Don. “We watched the case and hospitalization trends closely. We thought it would be selfish to risk an injury that might require medical care when our hospitals were so overwhelmed by life-and-death situations.”

As for Don and his father, they had made a promise to be together as Don ran through Mississippi.

“Unfortunately, that couldn’t happen after he passed away,” said Don. “But I was determined to keep my promise to him and finish just the way he believed I could.” Six months after stopping in Texas, Don and Leslie picked up where they left off, only to be stopped a second time when the next surge hit.

“But COVID didn’t change my mission,” said Don. “I never considered quitting even once.”

Breaks from the project only seemed to strengthen Don’s resolve. He estimates that he ran more than 1,200 miles during those months, in addition to biking and swimming.

What did change was Don’s approach to his diabetes management. As a Tandem Diabetes Care® t:slim X2™ insulin pump user, he had been apprehensive to try the system’s Control IQ® technology that had been released so close to his original start date. Now at home, he was able to update his software and test the features on his training runs.

I started pumping 15 years ago and Control-IQ technology has given me my first uninterrupted nights in 15 years.

Don remembered experiencing a severe low that required glucagon treatment during his run across Texas in 2019, a “situation neither Leslie nor I ever wanted to be in again.”

When it came to running, Don compared Control-IQ technology to his experience on a different pump.

“The fact that in auto mode I couldn’t manually bolus without dysfunctional workarounds was a real problem,” he explained. “It was also very intolerant of rapid BG [blood glucose] changes. Using my t:slim X2 pump with Control-IQ technology avoids both issues.”

And he found the precision to be much better.

“When you’ve got a lot of critical decisions to make in extreme conditions, it’s nice when some of them get easier, especially the diabetes-related ones,” he explained.

When his coast-to-coast run resumed for a third and final time, Don had his regimen dialed-in. To account for high, exercise-induced insulin sensitivity and fluctuations in stress on the road, he relied on the Sleep Activity feature for overnight control.

“That turned out to be the best answer,” he noted. “The more gradual basal adjustments solved the lows for the most part, but kept the highs in check, too.” 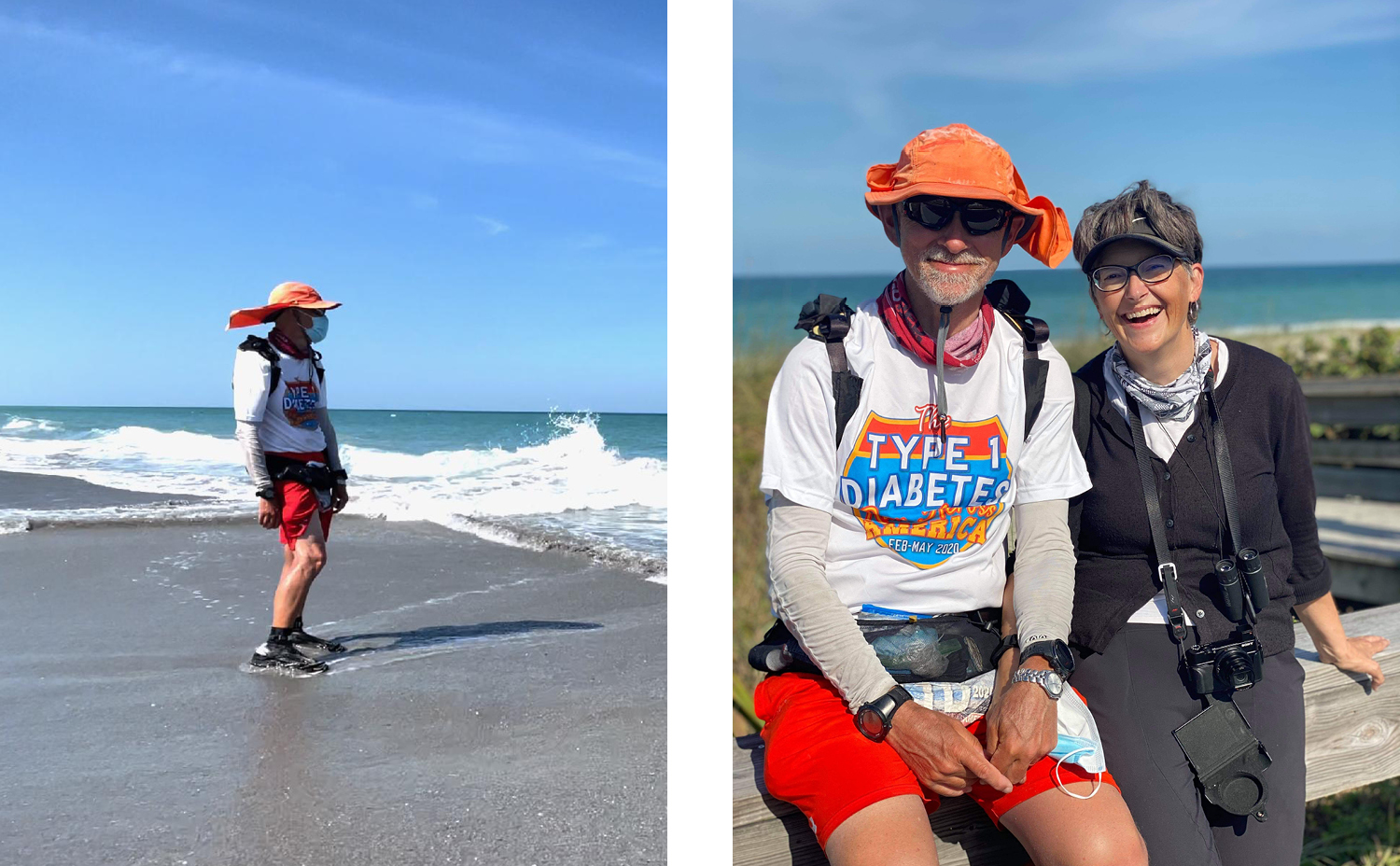 Looking back on his accomplishment, Don is beginning to appreciate the success of his campaign. He and Leslie had encountered countless people on their journey who had been touched in some way by type 1 diabetes.

“We hugged emotional parents on narrow roadsides who cried because they thought all of their hopes and dreams for their type 1 kiddos were shattered by this diagnosis,” he recalled. “They said over and over again that seeing this run helped them start to believe again that anything is possible for their child.”

But Don knows that work remains.

“We also met lots of adults with type 1 who have literally never known anyone else with type 1, and folks who have to travel hours and hundreds of miles to see an actual endocrinologist or CDE [certified diabetes educator],” Don said. “They’re learning lessons the hard way that I know our online community could help them with. We need to try even harder as a community to make sure no fellow T1Ds fall through the cracks.”

So as this chapter in Don’s decorated history concludes, his next adventure begins.

“I’m thinking about training for a swim around Key West,” he said. “And I’ve only run across a few states. There are still more than 40 left.” 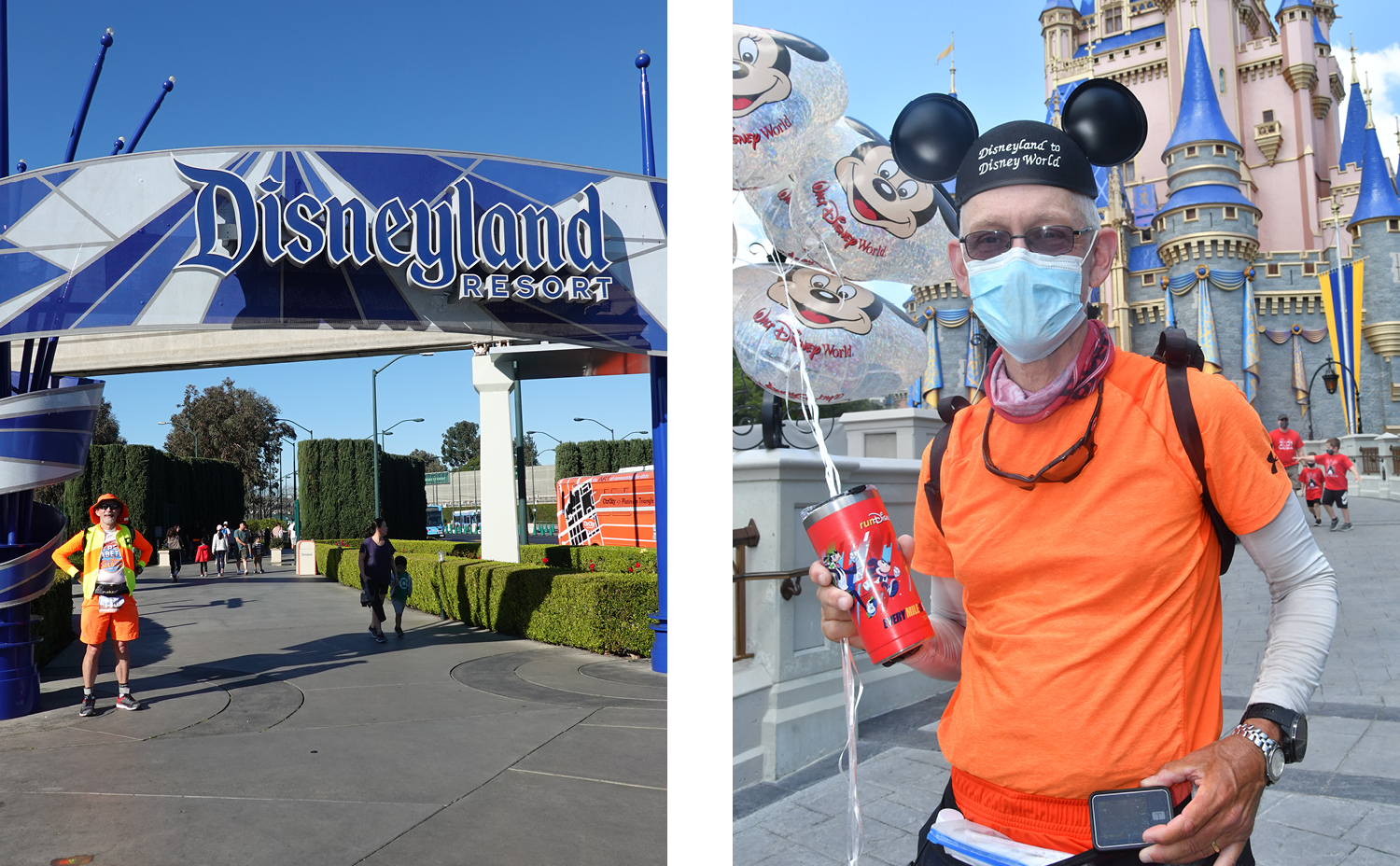 Congratulations Don on such an amazing accomplishment. Thanks for sharing your story with us. We can’t wait to see what you do next.

Even with advanced systems such as the t:slim X2 insulin pump with Control-IQ technology, users are still responsible for actively managing their diabetes. Control-IQ technology does not prevent all high and low blood glucose events. The system is designed to help reduce glucose variability, but it requires that users accurately input information, such as meals and periods of sleep or exercise. Control-IQ technology will not function as intended unless all system components, including CGM, infusion sets and pump cartridges, are used as instructed. Importantly, the system cannot adjust insulin dosing if the pump is not receiving CGM readings. Since there are situations and emergencies that the system may not be capable of identifying or addressing, users should always pay attention to their symptoms and treat accordingly.