Glycemic Index System
The differences between carbohydrate foods can be described in relation to their glycemic index. Simply put, this index, which goes from 100 to 0, indicates how quickly a food raises blood sugar levels. Glucose is rated at 100, and the closer to 100 a food is rated, the more it affects blood sugar levels.

Those foods with a low glycemic index (55 or less), which includes most vegetables, don’t raise blood glucose in the way those with a high index (70 or higher) do—foods such as white bread, potatoes, and pasta.

The system ranks carb-containing foods according to their effect on blood glucose and maintains that equal amounts of different carbohydrates can have different effects. 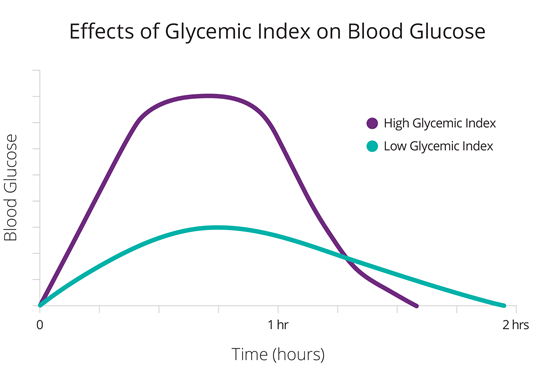 In general, a serving of food with a value of 1—10 is considered to have a low glycemic load, 11—19 a medium glycemic load, and 20 or higher a high glycemic load. The table “Same Carbohydrate, Different Glycemic Load” shows the glycemic load for a variety of portions of foods.

Usually, you don’t just eat one food by itself — you eat a whole bunch of foods together. The glycemic load of a portion of a single food or of a meal (with a mix of foods) may be a better predictor of after-meal blood glucose level than the carbohydrate content of the food portion or meal. You can add a particular nutrient to a meal and affect the Glycemic effect overall. As a general guideline, the more fiber a meal has the better. The same foods can have a high glycemic index, but an overall low glycemic load, making it better for you than it originally might have appeared using only the Glycemic Index System.

For example, adding peanut butter to a smoothie can help delay the absorption of the high Glycemic Index fruit and juice components.

According to the American Diabetes Association (ADA), the use of Glycemic Index  and Glycemic Load may provide a modest additional benefit over that observed when total carbohydrate is considered alone. 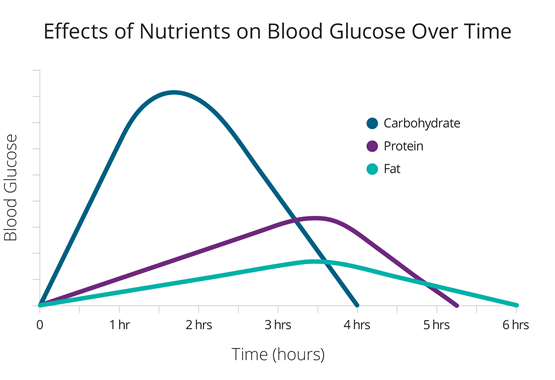 One of the most notable differences between insulin pump therapy and multiple daily injections is the ability to deliver an insulin bolus over an extended period of time. By using an extended bolus, you can choose to only take a certain percentage of your insulin up front (high GI portion of your meal) and have the rest delivered over an extended period of time (for food with protein, fat, and fiber). This allows you to better match your insulin dose to your food intake and provide a great deal of flexibility and control when eating.

If you don’t already have a Tandem pump, we have a free demo app that will let you try out our pump interface on your Apple or Android mobile device. You can experiment with pump settings, personal profiles, and practice using the Extended Bolus Feature. You can download the app from here.

The material provided is for educational and training purposes only, is general in nature, and is not intended to replace the medical advice of your doctor or healthcare provider. You are encouraged to seek advice from a competent medical professional regarding the applicability of any recommendation with regard to your symptoms or condition. It is important that you do not reduce, change or discontinue any treatment without first consulting your healthcare provider.